Come one, come all

I hope my tone isn’t too poopy-pants. Full disclosure: I was pretty depressed this trip. I also was feeling very under the weather (if smog is a weather). So grab a pretzel if things are feeling salty, I mean no disrespect to anyone behind the show or in the industry! Onward.

I was very disappointed last year with the decision to turn E3 into a public event. The crowds made the expo halls nearly useless. Everything was behind walls, giant lines or closed doors. I was cautiously optimistic that this year would be different with the “industry pass” hours, but on the whole I was feeling super down about the whole experience.

The gamer line was huge

I actually felt worse once I got to the show because there was a gigantic line of excited gamers waiting to get into their first (or second) E3. Am I so jaded now? Thinking back to the glory days of Kentia hall, filled to the brim with indie games and small businesses trying to make it with new and brave products, maybe I am.

Still, one saving grace for me in past years has been Microsoft. They’ve always had an accessible booth filled with games you can play immediately, or after a short wait. Staff seems to always be on hand, excited to talk to indies and answer questions. So that was the first place I wanted to go once the industry passes were let in. It turns out, Microsoft was not in either of the main halls. This year they had opted to have a parallel show in the Microsoft Theater next to E3, honoring E3 passes. I couldn’t find any information about whether industry passes had special hours or not, so I pressed on into E3 to see what I could see. It turns out, without waiting in a big line, not much.

One surprise after looking at the map was what a huge booth Frontier Developments had. As an Elite: Dangerous player, I was hoping to see some new stuff coming for E:D, or maybe play the game in VR. A few years ago I played my first demo at their tiny upstairs room and it blew my mind. It turns out they’re making a Jurassic Park game, and the whole booth was surrounded by a fence. There was a big line to see anything. I moved on. This seemed to set the tone for the whole show; while the crowds seemed more manageable with the public outside waiting in the heat to get in, most booths were designed for the inevitable hoards of people. There would be a few, premium, already announced games for a few people to play at a time while the rest of the space was designed to look cool and manage the massive lines.

Finally I found a small line for a game I was interested in, Soul Calibur! After fighting with the menu (the other player kept hitting cancel by accident) I was able to select the clothing-phobic character Ivy and get my ass handed to me by a stranger. It felt like the spirit of the game is still with Soul Calibur VI, and I hope to have a button-mashing good time with that when it comes out. From there I stuck to the back of the hall where the smaller booths were, as that area tends to be closer to what Kentia hall once was. Walking along, checking out various controller manufacturers, outsourcing companies and plastic toy sellers, I saw something very, very cool looking. Try not to get excited, no really

This is exactly what it looks like (well, almost): A tiny, table top, emulated NeoGeo arcade machine! It was loaded with awesome fighting games, like the King of Fighters series. It has HDMI out, two USB-C inputs for external controllers as well as built in controls for tabletop play. I have wanted a tiny, table top arcade machine for a long time now and this seemed to be it. Except for one HUGE problem. For reasons nobody at the booth could explain, both the arcade unit and the controllers utilize ANALOG JOYSTICKS. I cannot even begin to fathom what the designers of a NeoGeo machine were thinking when they put a bunch of arcade games — fighting games — that require precise 8-way controls on a machine with 360, full range of motion analog joysticks. People say “literally unplayable” about a lot of minor things, but I think in this case it’s the best phrase I can use. Even the removable game pads have an analog stick.

Now, benefit of the doubt due, it says “sample” on it. However these seemed to be pretty legit controllers and consoles. I’m even tempted to start demoing Super Slam Dunk Touchdown with these controllers: an analog stick and 4 buttons is exactly what my game uses, and they felt great to use. But for an 8-way digital arcade game? I’m floored by this. I really, really, really hope this gets fixed before this console comes out. Also, the ABCD buttons seemed to have been rearranged. You can see the differences between my actual NeoGeo game pad and the USB-C version. On mine, there’s a “square” feel to the stick — it wants to stick to the diagonals pretty heavily. This is something that annoys me as I would prefer the NeoGeo pocket style 8 way stick, but it’s still worlds better than trying to play with an analog stick.

My dream of a tiny arcade machine may yet come true, but isn’t quite here yet. Inching the tiny arcade needle closer to my dream are these little machines: Once again we have emulated games on a tiny arcade machine. Hooray! Unfortunately, they also fail to impress me upon closer inspection. Let’s take a look at Galaga, which they had next to the full, upright arcade classic: My Arcade? Or My NES port?

While the tiny arcade cabinet is super cute, weird d-pad/stick aside, you can clearly see that this is not the arcade classic Galaga. Rather, it looks to be the NES version. I’m sure this will appeal to someone, but as a classic arcade fan, it was disappointing to see anything less than a micro-sized arcade version. All the small arcades at the My Arcade booth seemed to be NES ports of simple 8 bit arcade games from what I could tell. Are you a bad enough dude to show me more than the title screen?

You couldn’t play any of these, they were all behind glass, but showed demos of game play in action. They also had Heavy Barrel and Bad Dudes, but you couldn’t see more than the title screen. From what I can see, Bad Dudes does look like it is showing the NES title screen with the LICENSED BY NINTENDO text taken out.

Next, I visited 8bitdo, who always have very cool controllers to show off and this year was no exception. Sorry for the fingerprints, they aren’t mine I swear

They’ve got new retro-styled game pads in a few different flavors with improved ergonomics and some with extra system buttons for modern consoles. They had an adapter to use different controllers on the Nintendo Switch which I think is very cool as well. Speaking of Nintendo…

Even before the public was let in, Nintendo’s booth was full. They were showing the new Smash Bros and Pokemon, I’m sure you can read about that stuff elsewhere. I was not terribly surprised, but a bit disappointed that they didn’t just have a nice, big, open booth full of Switch games to check out. Again, following the apparent theme of the show this year: It was all about huge lines and limited content.

Eventually the public was let in and E3 became the complete and utter gridlock of humans that it was last year. I bailed and went to peak at Microsoft’s off-site show. I figured with most of the public heading to the main expo halls, I could head over to the Microsoft Theater and see what was up, but it was still very crowded. The first thing to catch my eye was the Adaptive Controller from Microsoft. This is a huge product for gamers who can’t use traditional game controllers, as it allows every button and joystick the Xbox uses to be remapped to literally anything that can be attached to a wire. At $100, this polished, first party product really will make gaming accessible to just about everybody. Also, the prospects for fiddling around with it for a future reboot of my Rick Marooned on Mars show have got my wheels spinning. It’s available for pre-order, and I’m going to have to get me one! Microsoft had a row of games with short lines as well as a few games being shown with longer lines. It was a nice balance I thought, I just wished their space had been larger. Also, I asked and there were no industry-only hours for the Microsoft Theater. I think that alone would have made the Microsoft Theater a very attractive alternative experience to the expo proper. As it was, it was pretty crowded even though the main show had opened.

Wednesday, I was feeling like crap. Either the smog, or maybe I have allergies in LA, I have no idea. But by the time I got downtown, the public had already been let in (I didn’t notice the public got in at noon instead of 2 on Wednesday). I basically ate lunch and bailed. I did however make it to the ID@Xbox party again this year (something I wouldn’t miss for anything) and it was a blast as always. 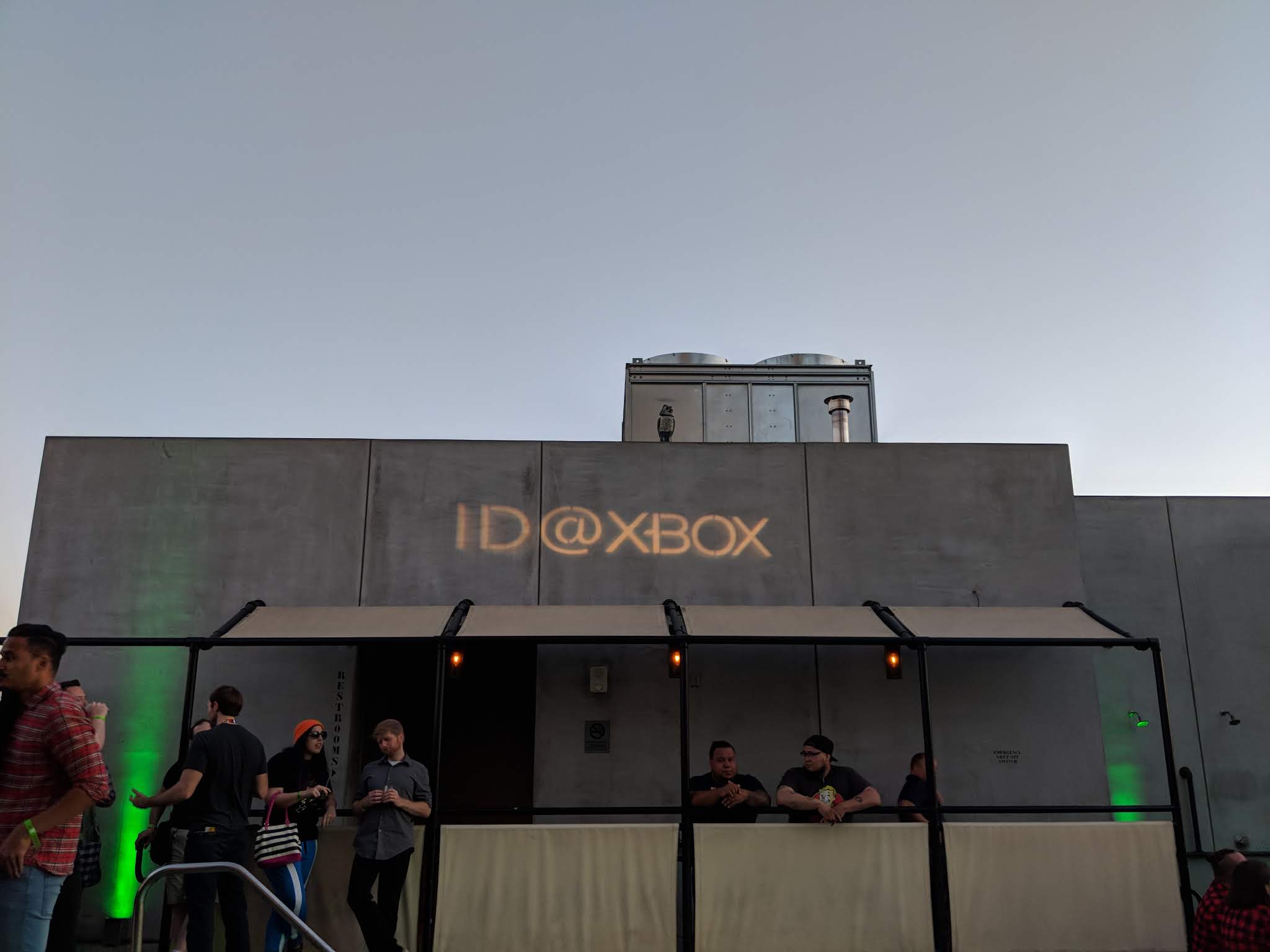 I got to chat with some VIPs working on Mixer about Rick Marooned on Mars as a possible show for the platform, and they seemed pretty jazzed about it. That project is really something I can’t wait to restart. It seems like the time to strike on that is now, but I have to finish SSDT first! Being a one man studio is very hard sometimes. In any case, I got a lot more out of the Microsoft party than the show proper! It was absolutely worth the trip just for that.

My main takeaway from this year is that E3 seems to be in an identity crisis. On the one hand, it’s an industry trade show where just about everyone in gaming comes together. On the other hand, the expo itself is trying to serve a huge, massive amount of gamers and fans who, in my opinion, don’t need to be at an industry trade show. There are plenty of events like PAX, MAGFest, DreamHack and others that cater much better to gamers. They have more to see, more to do, without waiting in huge lines.

Maybe it was me being depressed, or feeling under the weather, or maybe  I truly am a jaded, grumpy old fart. Either way, I cannot see myself standing in a Gamer Pass line for what E3 offered this year. Nor did I get much out of the show proper as an indie game developer. The industry pass hours helped, and perhaps they show will improve in the future. Now, back to work!