The end of the year that is! Just kidding, the end of Season Mode development is closer than it has ever been too, which really isn’t saying anything but sounds good. So here’s some actual meaty details on what is going on in the world of SSDT.

With a bit of movement on the arcade front, I’ve been bouncing back to arcade work in recent weeks. But there have been some improvements that are relevant to Season Mode in addition to progress being made towards completion of the game. I’ll talk about those arcadey bits in the Arcade Edition news below. But first, the Season Mode progress…

As per the last update, the player select screen for Season Mode is in much better shape.

Due to screen area restrictions, I had to axe the angled player select boxes, but the good news is I added a new stat for slam dunking. This gives you a better idea of how the players compare. Also there is information on the scoring and field, any modifiers in the match and the other team’s lineup. I’m pretty happy with it.

I decided to leave all arena configuration to the shop screen for simplicity, except ball selection. When you are playing a home game, you can choose the ball in play. I really like this feature as it lets you do a last minute gameplay tweak in your favor. When it is an away game, you will still see what the ball in play is and get information about it, but cannot change it. I am considering putting this as a start-of-match ball notification in Arcade Edition as well:

Speaking of balls, they are made available in the shop as you win games in the season. Purchasing them in the shop makes them available for selection. This is also how you will unlock new ball types for Quick Match.

That’s an older screen shot above, in the one below you can see how your current arena selection is reflected in the shop:

There’s new art for a lot of the Sports Pages newspaper headlines, most are done I think. There’s also AI improvements discussed more below.

There’s a few things I can’t talk about here, but I can show the improved Fan Points readability. By using a new outlined set of fonts it’s a lot easier to read on some of the arenas that were muddled before. 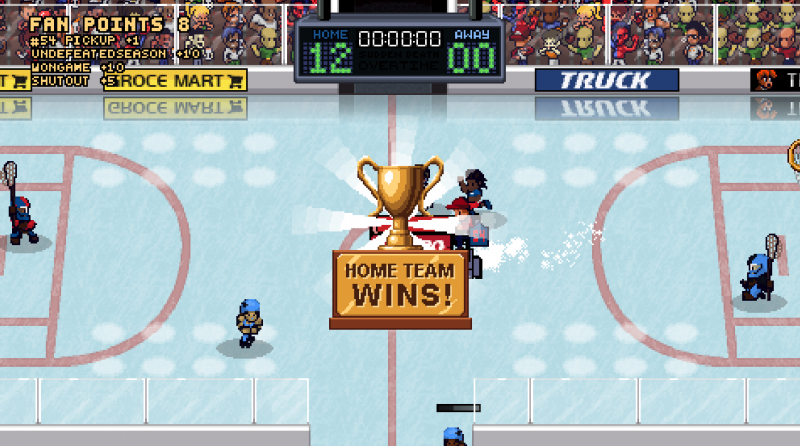 Currently my goal is to play through as much of Season Mode as I can to ensure all the unlocks and purchases and endings are working correctly while I consider ways of simplifying the remaining endings/story pieces. The big items left are:

Here’s a very, very useful graph that everyone loves, I think:

So, in summary, getting there.  Things got a bit sidetracked with the arcade news I’m about to go over in 3, 2, 1…

The biggest piece of news is that the one and only commercial arcade cabinet is undergoing testing at The Detour in San Francisco, CA! This is awesome because I don’t have time or money to run the expo circuit these days, so the feedback I’m getting from The Detour is invaluable.

While I solicit feedback and bring updates to The Detour, Season Mode is getting improved as well. The biggest piece of feedback I get from new players is that they have no idea how to play! This has been a big head-scratcher for me. At events like PAX South, I was on hand to explain game concepts and answer questions, but when it’s at a bar in the wild, I can’t be there every night! Also, the arcade experience is very different from the Season Mode experience, and I can’t walk players slowly through everything over the course of many games. A lot of information has to be presented in a short time.

I heard the suggestion from a few people that I should modify the Attract Mode (currently a demo game) to be more of a “HOW TO PLAY” video. This is what I am currently working on and I am finding that watching the AI follow simple instructions outside of the context of a frantic live match is very informative. I am seeing some weird issues and noticing how the AI can be improved. This has an immediate benefit of improving the game experience. In addition to this, it may make sense to adapt this “HOW TO PLAY” mode for the home versions.

All this is baking in my brain and I hope that when I review the training games in Season Mode I can better explain some of the game mechanics that people have trouble with.

The prototype is sold!

The last piece of news is that the SSDT prototype cabinet has been sold to a private buyer. I have rewired the prototype cabinet and am putting together a computer identical to the one in the commercial cabinet, for performance reasons as well as to simplify the update process for both machines. This has taken time from everything else, but given how expensive this arcade building venture was, I am relieved to be getting some money back for my efforts. I hope to ship it out to the buyer as soon as I can get the computer parts delivered, assembled and mounted in the cabinet.

The commercial model is technically still for sale, but I would rather it live in a bar than go to a private seller. I can’t store the cabinets in my apartment so this is where things stand. I can continue to improve the Arcade Edition and make Season Mode better via feedback in the real world, and still mostly focus on Season Mode.

This year was possibly the hardest of my life. A lot went wrong. Completing the commercial arcade cost more than I thought and I wasn’t able to secure buyers. There were some heartbreaking personal life catastrophes. I lost both my cats to cancer. The shop where I was building the cabinets was closing down and I had to spend long hours assembling the commercial cabinet by myself. Given how expensive, stressful, hazardous and time consuming this has all been, these two cabinets will likely be the last ones I work on. If things get to the point where I have like 5 orders for new ones, I would see what it’d take to have them built — by someone else! I’m super proud and happy to have done what I have done, and extremely grateful to everyone who helped (especially Rob and Anthony from Three Flip Studios!) but I don’t want to die from being crushed by an arcade cabinet. The lone commercial cabinet will have to decide the success of the future for Arcade Edition. If you’re in SF, give it a play at The Detour!

I’m excited to be getting interest in this game after it seemed everyone had forgotten about it. Please check in on the Steam Forums if you are interested in checking out Season Mode before release! I’m considering spinning off a test build for hardcore fans to try out. If there isn’t sufficient interest I won’t bother, so tell your friends! ➡ THAT LINK AGAIN! ⬅